A spacecraft computer is not much use if it cannot keep on running in space conditions – so this qualification model of QinetiQ Space’s new onboard computer design has just spent two weeks in a thermal vacuum chamber in ESA’s Mechanical Systems Laboratory at ESTEC in the Netherlands, exposed to the equivalent hard vacuum and temperature extremes of Earth orbit and deep space. 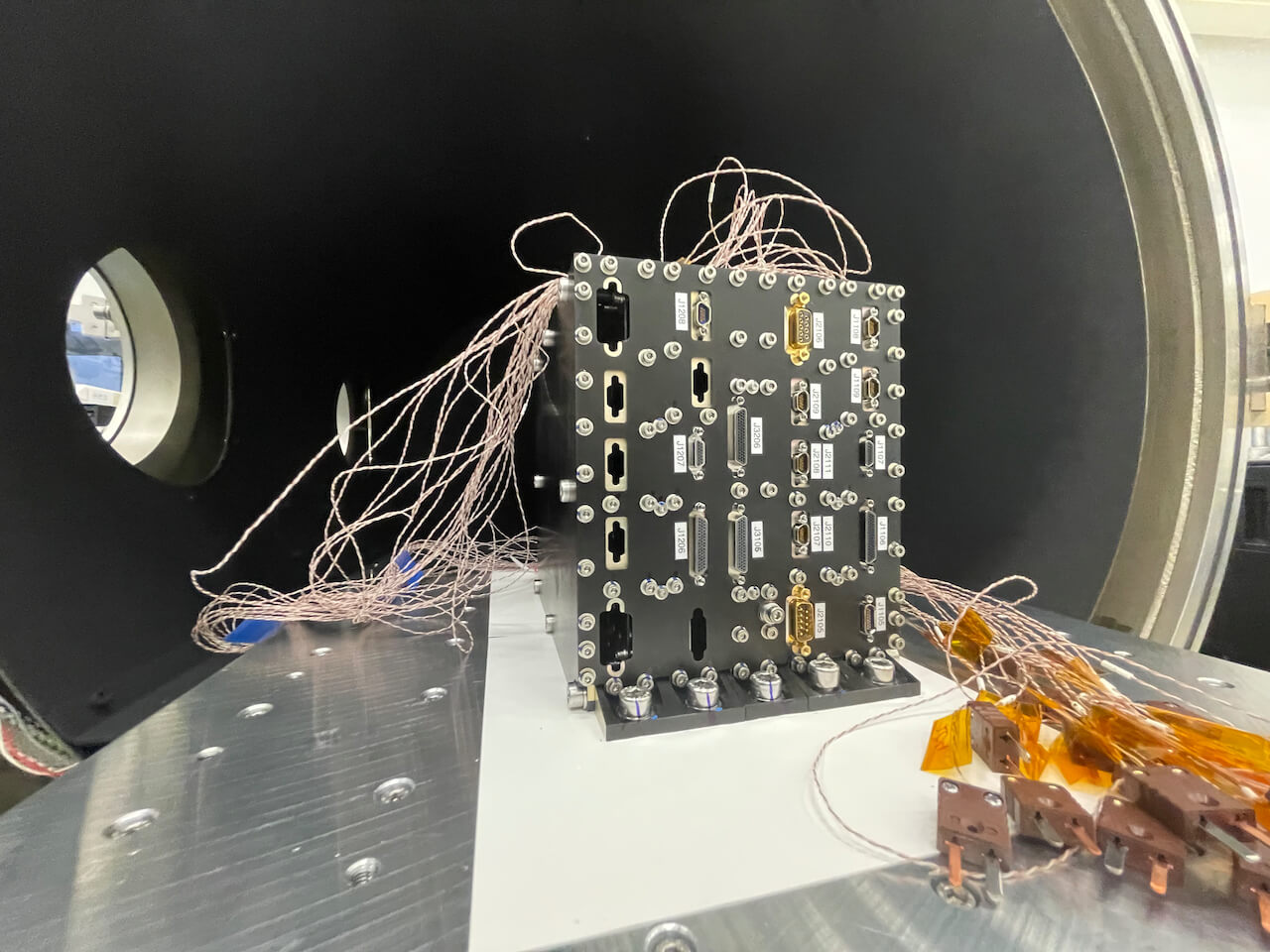 Qualification model of a new onboard computer design being tested in a thermal vacuum chamber at ESA ESTEC. Credit: ESA

This same onboard computer design is already planned for use by various ESA missions currently in development, including the Hera mission for planetary defence, QKDSat to test quantum key distribution from orbit, and Altius to map ozone and other trace gas profiles in Earth’s atmosphere, as well as aboard the carrier platform for an in-orbit technology demonstration mission from the European Commission’s Horizon 2020 Programme.

“It is one of four avionics units, altogether forming the Proba-Next platform’s core avionics set, called the ‘Advanced Data and Power Management System 3rd Generation’, or ADPMS3 for short. These units are designed with a modular approach, for use by satellites either to complement each other or separately, based on particular mission needs. Their versatility also allows for either redundant or ‘single-lane’ use.”

The combined ADPMS3 system, designed and manufactured in accordance with all applicable European Coordination on Space Standardization (ECSS ) standards, comprises an onboard computer (OBC), a power control and distribution unit (PCDU) which handles the supply of power to all satellite subsystems, units and payloads, a remote terminal unit (RTU) which serves as a kind of extension of the OBC for the management of specific subsystems such as propulsion, and a mass memory unit (MMU) for payload data storage.

The first generation of the ADPMS was developed for use aboard the small family of Proba satellites, and was used for the first time for the ESA’s Sun-watching Proba-2 mission, in orbit since 2009, with ADPMS2 – an evolved version integrating the mass memory function – serving on the Earth-observing Proba-V and the double-satellite Proba-3 formation flying mission, due to be launched late next year.

Stefano adds: “We’re currently performing a complete qualification of the new ADPMS3 set of avionics units, which has four times the processing power of its predecessor, can manage and distribute a sensibly higher amount of electrical power, while being fully compliant to ESA’s latest design evolutions, including end-of-life passivation and space debris mitigation regulations, requiring, between other factors, the complete passivation of the satellite at the end of its mission.

“Testing is being shared between the ESTEC technical laboratories and ESTEC Test Centre managed by European Test Services , including vibration, shock and electromagnetic compatibility as well as thermal vacuum cycling. The complete avionics set qualification campaign began a month ago and is planned to last run until the summer break; so far the results are looking extremely promising.”